Since we just created a category of posts under the label “Ideas” to spur creativity in our mission, it is important to offer a few guidelines for how to interact with these ideas.

An earlier post talked about why we are doing this, but let me summarize two key reasons:

1. To encourage better, more creative ideas for our mission.
2. To foster one of our core values–the participation of the whole family in mission.

These two goals are much more likely to be achieved if the conversation surrounding our ideas is cooperative. That doesn’t mean that we make up stuff to say even if we don’t like an idea. Instead, it means that we think in the same direction at the same time.

Dr. Edward de Bono developed an approach called the Six Thinking Hats. In a brainstorming session, everyone on the team wears the same hat at the same time (except the facilitator, if you have one). Everyone thinks in the same direction to minimize distraction, conflict, and confusion. Here are the hats: 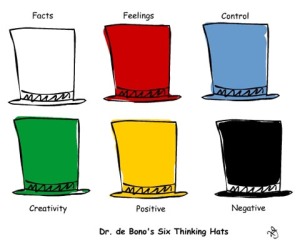 Here’s an example of unproductive group brainstorming conversation, as seen through the lens of the Six Thinking Hats:

Green Hat: “What if we hosted a block party next month?”
Black Hat: “We don’t have a permit to do that.”
White Hat: “How many grills do we have at our disposal?”
Yellow Hat: “We could get name tags to help us get to know more people.”
Red Hat: “I’m nervous about having a large group in our front yard.”
Blue Hat: “We should just vote on this to see if enough people want to do it.”

Six people trying to think together, but all of them in different directions. Replace “block party” with some other idea, and this is basically a script for lots of conversations I’ve participated in.

So allow me to put on the Blue Hat and suggest a method for us. A post in the “Ideas” category will be a Green Hat statement, a new idea that probably came up spontaneously but has enough merit to be considered (or at least not immediately forgotten). The White, Red, and Yellow Hats will be the most effective tools for early comments. What’s our gut-level response? What do we need to find out? What could the idea accomplish? Later in the conversation, if it seems like we’re moving from dreaming to planning, the Black Hat will need to be put on to consider obstacles and dangers we’ll need to avoid.

Brainstorming through threaded comments won’t be neat and tidy, so don’t get overly concerned about “What hat am I supposed to be wearing?” The point is to have a little awareness about productive group process so that more ideas will be produced and developed into amazing ideas that become energizing plans of action.

Some questions for you:
What hat fits you most comfortably / least comfortably?
Does the conversation I made up sound familiar?

Posted on December 22, 2011 by peterandrewhough in Uncategorized